Colin McGinn’s excellent review of my book The Tell-Tale Brain [NYR, March 24] elegantly summarizes the main ideas in the book and makes good observations about the chapters on phantom limbs, body image, visual processing, synesthesia, mirror neurons, and language. “This is the best book of its kind that I have come across for scientific rigor,” he says.

However, he adds, incorrectly, that I fail to distinguish between arousal, pleasure, and aesthetic response in art. Actually, I distinguish between them several times. For example, I note that a nude glimpsed behind a shower curtain is more aesthetically pleasing, although presumably less arousing, than one that is completely exposed. Similarly, abstract art may stimulate cells that detect primitive forms that define objects. Are such stimuli merely arousing or attractive or both? That our analysis even throws up these questions is a big step forward in an otherwise nebulous field.

Our brains have over thirty visual areas arranged hierarchically and at every stage a partially computed “solution” is fed back to earlier stages to bias further processing. Each partial solution echoes back and forth with reward centers (amygdala), ensuring that art is a vastly more complex and multi-layered experience than mere pleasure, yet scientifically tractable.

Early in any scientific enterprise, it is best to forge ahead and not get bogged down by semantic distinctions. But “forging ahead” is a concept alien to philosophers, even those as distinguished as McGinn. To a philosopher who demanded that he define consciousness before studying it scientifically, Francis Crick once responded, “My dear chap, there was never a time in the early years of molecular biology when we sat around the table with a bunch of philosophers saying ‘let us define life first.’ We just went out there and found out what it was: a double helix.” In the sciences, definitions often follow, rather than precede, conceptual advances.

McGinn is also suspicious of our attempts to explain complex mental phenomena in terms of anatomical structures and their interactions. His claim that the lesion method in neurology (observing what functions are affected by damage to specific brain areas in a systematic manner) “is not the usual way that biologists investigate function and structure” is quite silly. Biologists know that destroying the islet cells in the pancreas causes diabetes and bombarding fruit fly chromosomes with X-rays produces genetic mutations leading to monstrous flies. Such observations led biologists to home in on DNA as the mechanism of heredity and the genetic code.

Likewise, building on the work of Sergei Korsakoff and research by Brenda Milner and Sue Corkin on the case of “HM”—a patient with damage to the hippocampus who couldn’t form new memories—led to the insight that the hippocampus was involved in memory. This resulted in a detailed understanding of the cellular mechanisms involved in memory elucidated by Eric Kandel’s Nobel Prize–winning group of researchers.

Although one can’t be sure, there is no reason to doubt that this strategy will be equally successful in unraveling such neurological questions as the nature of metaphor, body image, self awareness, free will, or qualia—the felt properties of our mental states. Phantom limbs and out-of-body experiences must surely tell us something about how the brain constructs body image. Similarly, the phenomenon of “blindsight” (in which patients with no perceptual awareness nonetheless predict certain properties of visual stimuli at levels well above chance) seems to promise insights about qualia (qualitative subjective experiences, like seeing red) and related philosophical problems.

Finally, McGinn disputes my claim that humans are unique on the grounds that every species is unique by definition. But this is like saying that Einstein is not a unique individual because every tramp on the street is unique, each in his own way. My point was that, even within the order of primates as a whole, humans are uniquely unique because of the emergence of qualitatively different abilities (whether recursion in language, abstract thinking, self-awareness, humor, foresight, creativity, metaphor, or the rapid transmission of culture).

Some of these unique functions, in turn, are based on structures equally unique to the human brain, such as the angular and supramarginal gyri—or convolutions—that branch off from the inferior parietal lobule in humans, the Wernicke’s (language comprehension) area, and Broca’s area. Other unique traits, such as cultural transmission of complex skills through imitation, may involve a more sophisticated deployment of preexisting neural circuits such as those embodied in mirror neurons. Obviously, mirror neurons aren’t sufficient for imitation, but they must have played an important role.

The main thesis of my book is that the fortuitous coemergence of some of these abilities in evolution—and the equally fortuitous interactions between them—culminated in human uniqueness as it is generally understood. I agree that this concept is tainted with human chauvinism (after all giraffes are unique in having a long neck) but so what? So long as our ideas and findings lead to new insights, the terminology doesn’t matter.

Despite these minor differences of opinion I applaud McGinn for his generally thoughtful review.

Ramachandran’s reply confirms my impression that he combines scientific expertise with philosophical naiveté.

Aesthetic response is not the same as finding a glimpsed nude more appealing than a fully exposed one: art involves pictorial representation for one thing, and an awareness of historical context, and an appreciation of the artist’s skill and taste and creativity. I can assure him that philosophy of art is not a “nebulous field” into which he is injecting much-needed clarity.

Crick’s dismissive response to the question of defining consciousness shows a total blindness to the possibility that “consciousness” might be a highly ambiguous word, covering very different types of phenomena—sensory experience, cognition, attention, wakefulness, self-consciousness. Obviously any investigation of something called “consciousness” will have to be clear about which of these senses might be in question—for instance, distinguishing self-awareness from simple perception. Philosophers have done much to clarify these distinctions.

Ramachandran misses the broader thrust of my point about the lesion method of study and misrepresents my attitude toward it. The point was that the brain does not wear its functions on its face in the way the gross anatomy of the body does: you can see by casual inspection that legs do the walking but not that the occipital cortex does the seeing, so it is necessary to fall back on observing the effects of injury (as I noted, this can also be done with the body). I did not object to this method, merely noting its conspicuous prevalence in brain studies.

Again, Ramachandran reveals his lack of understanding of philosophical problems in suggesting that neurology can resolve questions like free will and qualia—though it may provide relevant data. Philosophers want to know whether free will is possible in a deterministic world and whether qualia are reducible to brain states (among many other things): these questions are not going to be resolved by discovering the neural correlates of such things. Here I suggest that he consult an introductory text in philosophy of mind.

On human uniqueness, he reports only part of my discussion, omitting the crucial point. This is that in speaking of uniqueness as he does, he enters evaluative territory, declaring some human traits superior to the traits of other animals. That issue involves questions of value, not just questions of scientific fact—which is perfectly fine, so long as it is clear what you are doing. He persists in his confusion on the matter by referring to the “qualitatively different abilities” of humans: does he mean the abilities are superior or merely found only in humans? Many abilities are found only in certain nonhuman species, e.g., flying—but that doesn’t ipso facto make them superior to other abilities. The terminology does matter, because it can lead to false and confused claims.

My advice would be to spend some time studying some basic philosophy, instead of caricaturing it (“‘forging ahead’ is a concept alien to philosophers”); that might lead to a neuroscientist with philosophical sophistication—which would be something of real value in today’s intellectual culture. 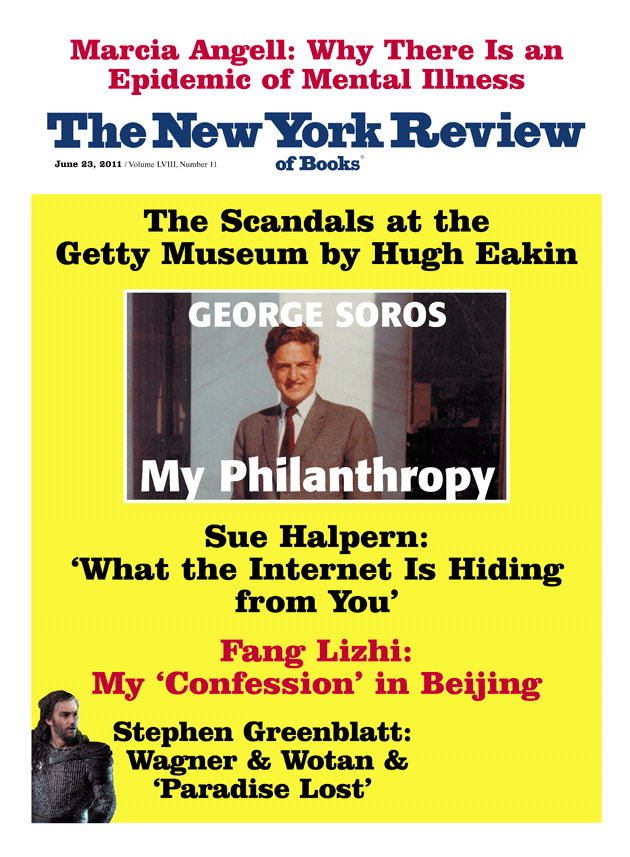 ‘I Married a Computer’: An Exchange

Seeing Through the Brain

Can the Brain Explain Your Mind?

Of Brains & Minds: An Exchange

Women Versus the Biologists: An Exchange

translated from the French by John Ashbery

Our 86 Billion Neurons: She Showed It