I am honored that Christopher R. Browning has extensively reviewed my book, Eichmann’s Jews [NYR, August 16]. It is unfortunate, however, that he does not provide New York Review readers with my study’s central thesis: it was in Vienna that Adolf Eichmann first addressed the so-called “solution to the Jewish question.” The Viennese Jewish community organization would become the prototype for the subsequent Jewish councils. The circumstances in Vienna from 1938 on reveal just how restricted the Jewish functionaries’ room for maneuver was from the beginning.

Browning criticizes my insistence on drawing a line between National Socialist perpetrators and Jewish victims, preferring the conception of a “gray zone” in which ambiguity reigns between victims and perpetrators. But I maintain that one should not recognize only the purely innocent as victims. Browning then states that I use the same meretricious “rationalizations and language” to exculpate the Jewish functionaries that many Nazi perpetrators used. They, too, claimed that by staying at their posts, they prevented worse. But a failure to draw clear distinctions inevitably leads to dubious equations. The excuses offered by the mass murderers on trial after 1945 are not equivalent to the Jewish functionaries’ agonized self-questioning during the Shoah. Browning would certainly not wish to suggest that Adolf Eichmann suffered the same moral conflicts as Josef Löwenherz. My insistence on this distinction does not constitute an apologia. On the contrary: neglecting it could serve that of the perpetrators.

I do not obscure but seek to establish exactly what the Viennese Jewish functionaries did and what they knew at any given point, but also, importantly, what they did not yet know. These functionaries could not have envisaged the Nazis’ systematic extermination not because they were victims of their own, Jewish, history, but because what befell them surpassed the imagination of the entire civilian population, Jews and non-Jews alike. Even today, it is difficult to comprehend the extermination of the Jews. Historians are still debating when and why the decision to exterminate them was reached. Should the Viennese victims have understood more than historical scholarship does in hindsight?

Browning also criticizes me for making the charge that “the countries of the West could have prevented the extermination if they…had willingly accepted the refugees” in the late 1930s. But he has abridged my sentence and taken it out of context. Under the heading “The Victims’ Perspective,” I sound out several scenarios depicting various hopes the Jewish functionaries might still have been clinging to at the time. Immediately after this passage I state explicitly that

it is not a question of speculating what would have happened if events had taken a different course but of describing the prospects and insights of the Jews and their representatives. What were the victims’ perspectives?

I was not attempting to explain how the mass murder might have been thwarted. I was not discussing our perspective today, but that of the Jewish functionaries in Vienna in the late 1930s. They were stalling for time, but the Nazis controlled the clock. The Jewish administrators were agents of powerlessness.

I appreciate Doron Rabinovici’s courteous reply to my review. I did not emphasize what he considers his central thesis because I did not find that argument, in contrast to other parts of the book, particularly controversial or original. I certainly think it is necessary to preserve the distinction between the starkly different choices and consequences facing perpetrators and victims, and careful use of language is part of preserving that distinction. It was precisely Rabinovici’s occasional use of the same phrases and arguments for both that I found jarring. I think it is also important to preserve the distinction between the response of a Murmelstein, Merin, or Rumkowski on the one hand and a Löwenherz or Czerniakow on the other.

I reject Rabinovici’s claim that I took his sentence concerning Western culpability out of context. This sentence indeed appeared under the heading “The Victims’ Perspective,” but was Rabinovici’s own venture into counterfactual assertion. It follows sentences in which he announces that this chapter will look at “what could have happened” and then “also” at the strategies and hopes of Jewish functionaries. Most often Rabinovici quite rightly sought to articulate the perspective of the Jewish functionaries at that time. It was his occasional lapse into the voice and vantage point of the self-appointed defense attorney that I criticized. 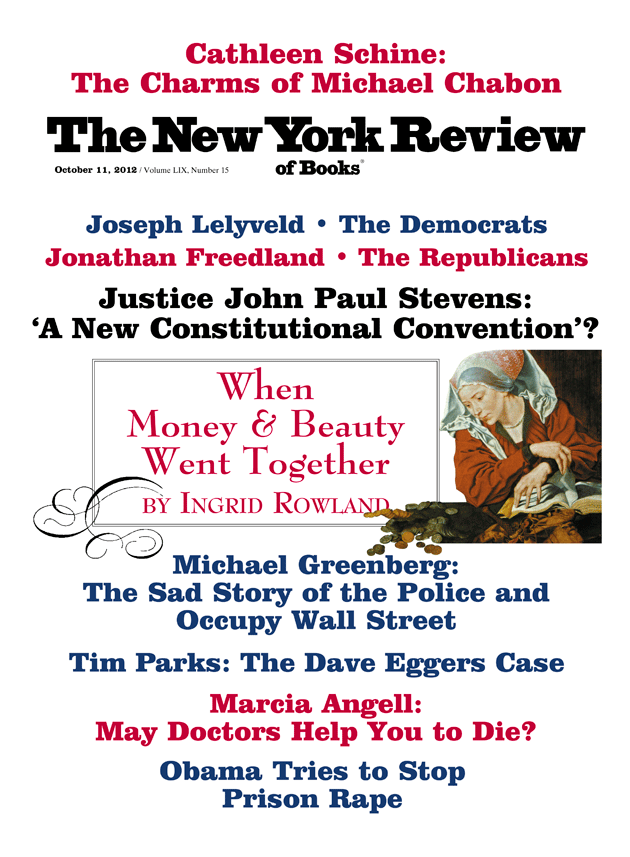 Should We Have a New Constitutional Convention?

Waking Up at the Movies

Should We Have a New Constitutional Convention?

Waking Up at the Movies

Memory and Its Discontents